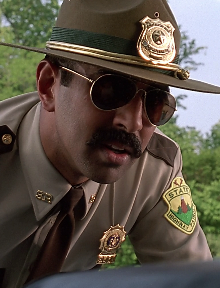 Actor, director, writer, and comedian Jay Chandrasekhar is best known for his work with the hilarious Broken Lizard comedy troupe. He's directed and starred in a number of the group's films including cult favorites "Super Troopers" and "Beerfest." Outside of his Broken Lizard work, Chandrasekhar has also found success on the small screen, having directed episodes of hit TV shows including "Arrested Development," "Blue Mountain State," and "Community."

Director/writer/comedian/actor Jay Chandrasekhar has contributed and appeared in a wide variety of critically acclaimed television programs and films throughout his career.

After graduating, Chandrasekhar and his classmates from Colgate University formed Charred Goosebeak, a sketch comedy group. Upon graduating, the members of Charred Goosebeak changed their name to Broken Lizard and performed at comedy clubs and college campuses across the nation until the mid-90s, when they set their sights on producing television and feature films.

In 2005, Chandrasekhar directed The Dukes of Hazzard, a silver screen adaptation of the hit 1980’s television show for Warner Bros. which grossed over $111 million worldwide. In 2012 he directed and starred in Millennium Entertainment’s The Babymakers, alongside Olivia Munn, Paul Schneider, Kevin Heffernan and Nat Faxon. He can also be seen in DreamWorks’ comedy hit, I Love You, Man opposite Paul Rudd and Jason Segel.

Most recently, Chandrasekhar wrote, directed and starred in the adult comedy pilot Really, for Amazon Studios. Really follows the life of four hard-charging Chicago couples who are trying to hold on to their receding youth. The pilot stars Chandrasekhar, Sarah Chalke, Selma Blair, Travis Schuldt and Hayes MacArthur and will be available for viewing on Amazon Prime in late August.

Chandrasekhar tours the country doing stand-up comedy and currently lives in Los Angeles with his wife and children.